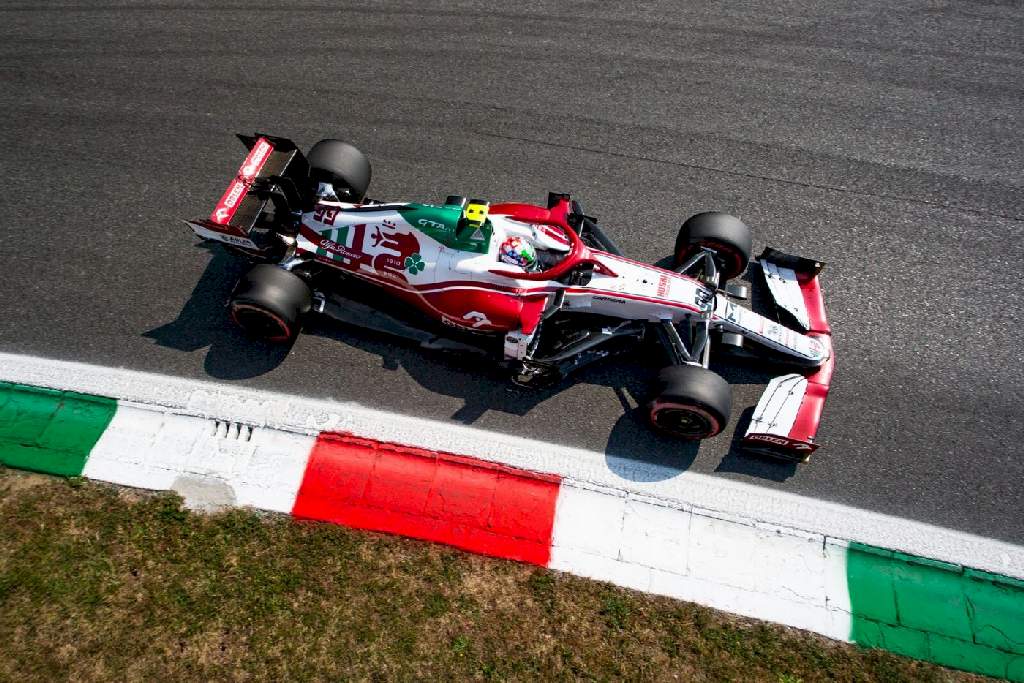 Alfa Romeo Racing ORLEN made its home advantage count as it booked a place on the fourth row of the grid for tomorrow’s Italian Grand Prix. Antonio Giovinazzi will start in P7 after a confident performance in today’s Sprint Qualifying, while Robert Kubica finished 18th after an early contact during battles on lap one.

Starting in P10, Antonio gained a place on Perez in the run to turn one – a position he was never to relinquish for the rest of the race – and set off in pursuit of the two Ferrari cars. Promoted to P8 after the exit of Gasly, Antonio ran a clever Sprint race, maximising the position he was in and confidently staving off the attacks of a resurgent Perez in the closing stages. A penalty to Sprint winner Bottas due to power unit changes means Antonio will start in P7 – his equal highest place on the grid and the same spot as he had claimed in Zandvoort, just a week ago.

Robert’s race was an eventful one: he was able to make some good positions at the first and second chicanes and seemed set on improving his starting position, only for a contact with Tsunoda to beach him in the gravel. The Pole managed to recover, re-emerging at the back of the field, with a damaged car but with his fighting spirit intact: he even managed to pass the Haas of Schumacher, finishing in 18th – one place higher than his Friday qualifying.

Today’s result gives us more than just a good grid position for tomorrow. It gives us the confidence in our means, knowing we can race in the top ten, keeping our rivals behind, in normal racing conditions. With so many fans in the stands wearing our colours, we want to deliver a special result.

Frédéric Vasseur, Team Principal Alfa Romeo Racing ORLEN: “The team delivered a really good performance under pressure to book seventh on the grid with Antonio – for the second week in a row. In a short race like today, we needed to keep out of trouble and capitalise on the opportunities and this is what Antonio did: he made up a place at the start, crucially overtaking Perez, gained another when Gasly crashed and then defended his place confidently when called upon. He really got everything he could out of this race and he’s set himself up to have a good race tomorrow. Robert was unlucky as his good start was nullified by the contact with Tsunoda, but he was able to keep the car going and bring it home one place higher than where he started. We have shown we can fight and keep up with the other cars at the front and the objective is the same for tomorrow. We want to have a good result, especially in front of our home crowd, and we’ve given us the best possible opportunity to do so today.”

“I am really happy about today’s result, especially in front of our home fans, and I’m looking forward to tomorrow. We knew we had to be aggressive at the start and we did it, making up two places. We’ve given ourselves a good position to start tomorrow, now we have to finish the job and hopefully gain even a little more. Tomorrow will be a very different race, with a lot of fuel, stops and strategy coming into play: but we are confident. Our pace looked good earlier today and we have good straight-line speed to help us defend. We can go out there and do our own race.”

“The race didn’t start well for me: I don’t know what happened exactly, but I didn’t manage to pull off cleanly from the grid and lost a lot of ground. Paradoxically, that gave me a good opportunity to see what was going on ahead of me and I could place myself really well into the first chicane, where I gained a couple of places. Then I did a bit of a rally-style move into the second chicane, passing in the middle of two other cars. Unfortunately, I was then hidden by Tsunoda and I got stuck in the gravel. I was nearly switching the engine off, but then I told myself to try and apply some of my rally skills to come of out the gravel: don’t ask me how but I managed! For the rest of the race I had a lot of oversteer in the right-hand corners and I couldn’t really make up many places: I only understood why when I got off the car – the rear of the floor got badly damaged in the crash and that caused all the balance issues.”