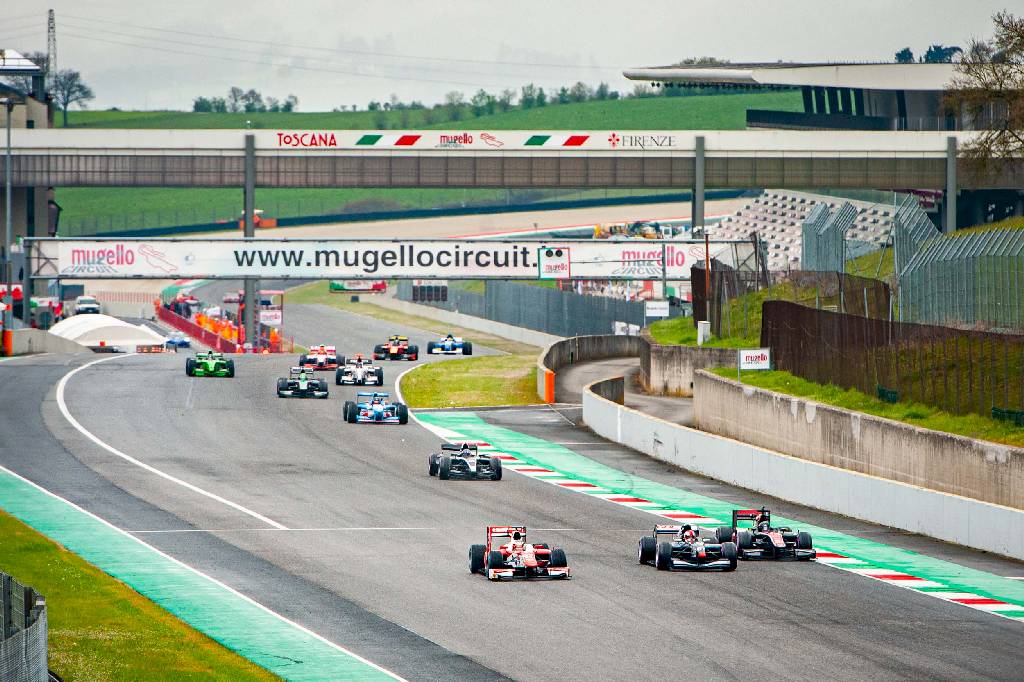 New teams, new pilots, new cars and new liveries were seen at the Mugello Circuit on Friday morning. The first outings after the winter break expressed the body and mind’s desire to get back in shape. At the Season Opening of Europe’s fastest racing series on one of the most beautiful racetracks in the world, the decisive question for engineers and drivers before the start of the races was: Pirelli’s P-Zero dry tyres or the Cinturato rain tyres? Both times it had rained before the race, but then it started to dry up.

It quickly became clear that the rain tyre was the right choice. Marco Ghiotto (ITA, Scuderia Paladio) was already in the lead when braking hard into the first corner. Pole setter Marc Faggionato (MCO, Zig-Zag), who was cautious at the start, immediately lost a few places. The first chaser of defending champion Ghiotto was Andreas Fiedler (GER, Fiedler Racing), who started the race from only 11th position on the grid and crossed the start-finish line in second place already after the first lap. But on lap 4 Fiedler was forced to retire for reasons still unknown; the German parked his GP2-Dallara in the paddock and was unhappy about the forgiven chance. Next chaser, Luca Martucci (ITA, MM International) set the fastest race lap, but lost too much time to Ghiotto in the early stages of the race. The 2020 and 2021 FORMULA champion, meanwhile, was looking for every wet spot on the tarmac to keep his rain tyres alive. A late safety car period helped Ghiotto to secure the race win.

Martucci finished second in MM International’s home race and made up six places compared to the qualifying session. Gianluca De Lorenzi (SMR, GDL Racing) recovered quickly from an initial excursion into the gravel trap, third place was a deserved reward at the BOSS GP debut for the Nürburgring specialist. Ulf Ehninger (GER, ESBA Racing) benefited from Ingo Gerstl’s (AUT, Top Speed) retirement, but the Benetton driver can still refer to a controlled race in slippery conditions. For this he got the well-deserved winner’s trophy in the OPEN class – the first in his BOSS GP career!

Gerstl took his revenge and fled at the start of the second race. The pole setter was first into turn 1 with his Toro Rosso STR1 and did not relinquish his position at the front until the end of the race. Ehninger, who also finished on the podium today after his premiere victory yesterday, traveled to the next race together with Gerstl as BOSS GP championship leader. In the FORMULA class Marco Ghiotto won again. However, the decision in race 2 was only made on the penultimate lap. Ghiotto had spun in lap 1 and then started a terrific chase which reached its climax on the penultimate lap: Marc Faggionato (MCO, Zig-Zag) was tenaciously defending his lead, but remained fair throughout. At the exit of the medium-fast turn 12, Ghiotto poked into a gap and overtook Faggionato. Behind the two, De Lorenzi finished third in the class. He stuck to the rear of Faggionato for a long time, but eventually had to let Ghiotto go as well.


Marco Ghiotto, Double winner FORMULA:
“An incredible weekend for Scuderia Palladio. The car was perfectly prepared, and I just had to keep the rain tyres alive in increasingly dry conditions. I was hoping it would start raining again and I was looking for every wet spot on the track. Luckily, it was enough, now Formula 1 can come (laughs).”

Ulf Ehninger, OPEN premiere winner:
“For me it is the greatest thing to be able to drive such a car (Benetton B197, note) and then on such a beautiful track like Mugello – unbelievable! When I stood at the top of the podium and the anthem was played, it was extremely impressive for me. In race 2, the gearbox broke down right at the finish line. Now we have to go full throttle to get spare parts so we can be back soon.”

Ingo Gerstl, Race winner OPEN:
“The drivers and the teams have been grateful to be able to get their cars out of the garage again. We have proven as a whole series that it can be done after all, and that we can still run a safe and yet unique race event for everyone, even in these times.”

Siegfried Stieger, CEO BOSS GP:
“The Hockenheim Historic in May has been postponed by the organisers. We are now trying to organise a replacement race for May at another Formula 1 circuit and stick to our plan of six scheduled race events and two test days in 2021.”