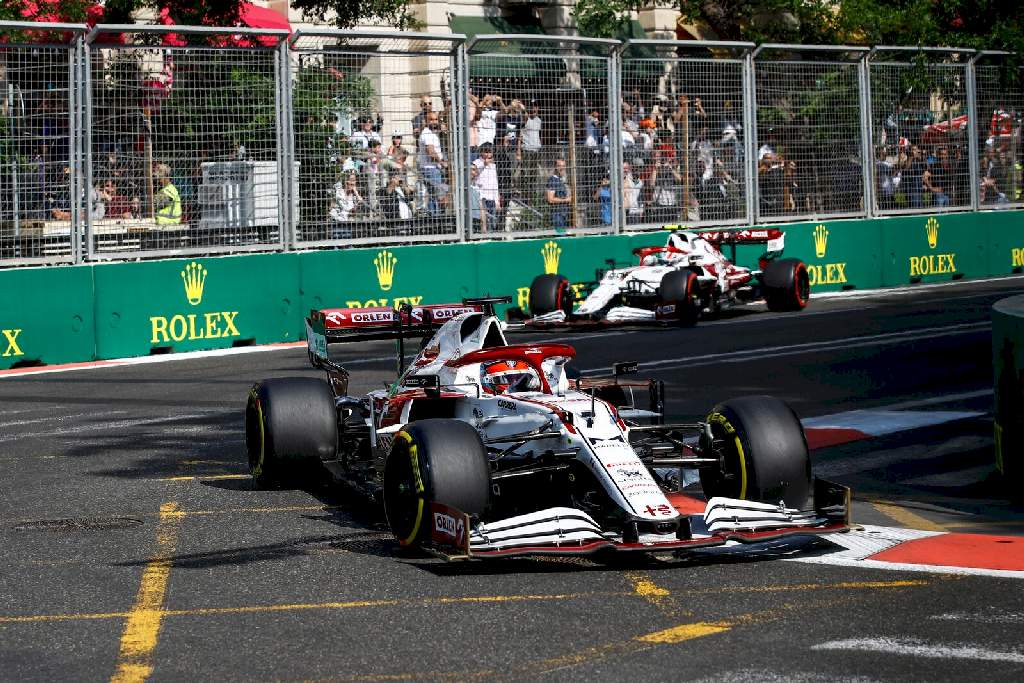 Alfa Romeo Racing ORLEN claimed their second points finish in a row in an Azerbaijan Grand Prix that kept most of the thrills for the closing stages. Kimi Räikkönen and Antonio Giovinazzi delivered an attacking performance from the start, making up places and challenging for the top ten from the very beginning, with the Finn eventually finishing in tenth to add a point to the team’s tally – and open his personal account for the season in the process.

Starting from the very back of the grid, Antonio made a strong start to climb all the way to P15, right behind Kimi. A strategic call to pit him after just two laps, to fit hard tyres, paid off as Antonio could then climb two further positions as his rivals pitted, with Kimi – starting on medium tyres on an alternative strategy – in P15. A safety car, brought in due to an accident to Lance Stroll, allowed the team to call Antonio in for another set of hard tyres but, just as the race was coming to an uneventful close, a red flag for Max Verstappen’s crash allowed the whole field to mount fresh soft tyres for a two-lap sprint to the flag.

At the restart, Kimi kept his cool to go from 11th to 10th, the final points-paying position, while Antonio, who had made up places with a good getaway, got delayed at turn two and eventually crossed the line in P11, just outside the points. After a challenging Saturday, the team showed resilience and good pace to make up as many positions as possible and bring home another good point. It’s a performance that encourages everyone, both trackside and in Hinwil, and gives us a confidence boost as we gear up for the next races in the calendar.

Frédéric Vasseur, Team Principal Alfa Romeo Racing ORLEN and CEO Sauber Motorsport AG: “We can be happy with bringing a point home, especially as we displayed good pace with both cars from start to finish. We were starting in far from ideal positions, but everyone in the team did a good job to allow us to fight for points until the final laps: to finish in the top ten for the second race running is a reward for clean driving, a strategy that allowed both drivers to be in a fighting position and some good stops. At the restart, we had to play our cards smartly as everyone was going to take some risks, but in the end we managed to come away with a good point. We have once again shown the progress we have made and how we’re in the position to be fighting for top tens regularly, but there’s still work to be done. We are confident and the last few races have really encouraged us, so we can keep pushing towards our objective.”

“Not a lot happened in my race until the last two laps, so it’s good to bring home a point. Overtaking proved surprisingly difficult, we were able to catch up with the cars ahead of us relatively easily but we couldn’t make the move. The restart after the red flag was quite hectic, we could have been better but it could have also gone badly wrong so we’ll take the point. I don’t think we could have done more, in the end.”

“I had a great start and this allowed me to be back in the battle for the points from the start. It wasn’t an easy race as I had a small issue with the brakes, which is not ideal on a track like this, but my pace was quite good anyway. We made an early stop to undercut some of our rivals and after that, it was a bit quiet until the red flag. At the restart, I gained some positions on turn one but I made contact with Ricciardo at the second corner and my car went into anti-stall. I think we got all we could out of this race, especially starting from last, and we ended up so close to the points. Many things happened today, it was quite a crazy race in the end, but we need to be happy as we got to score another point with Kimi, the second race in a row for our team.”