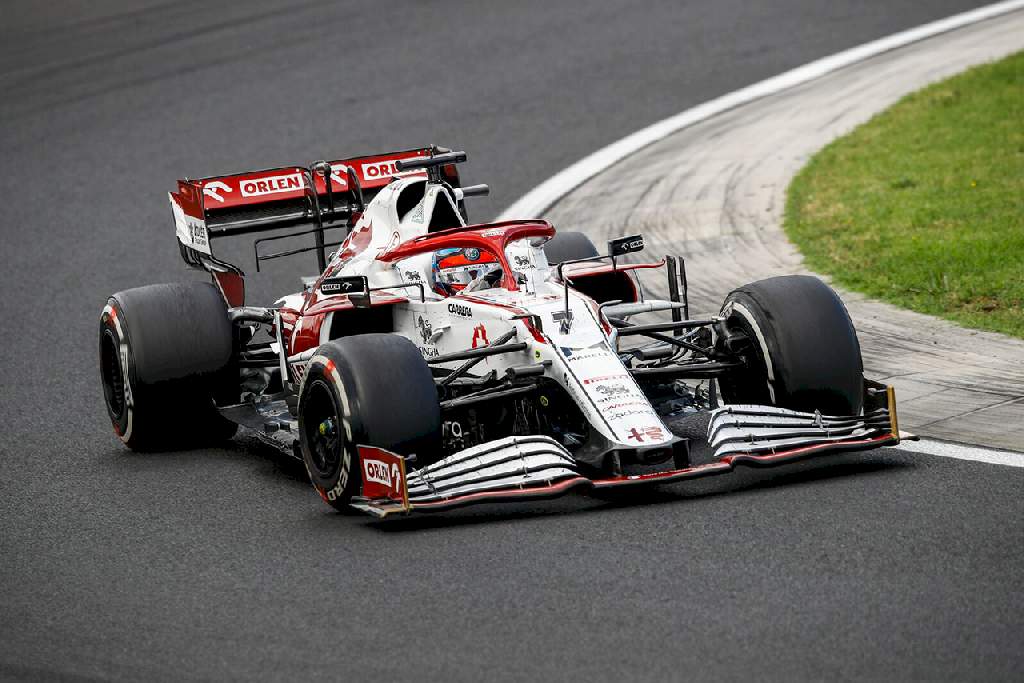 Alfa Romeo Racing ORLEN missed out on the points in an agonising manner in a chaotic Hungarian Grand Prix, with Kimi Räikkönen finishing in P11 and Antonio Giovinazzi in 14th. Both cars were in good position earlier in the race, but penalties to both drivers meant they had to start their climb again from the back, finishing just outside the top ten.

On the back of the strongest qualifying session of the year, there was optimism going into the race. A shower just minutes before the lights out meant the opening stages of the race were chaotic, with a series of incidents eliminating several competitors and the race red flagged after just two laps. Having had to take evasive action in the melee, both Kimi and Antonio had not capitalised on the confusion as much as hoped, but the restart provided a new chance to make up ground.

On a rapidly drying track surface, both drivers opted to stop for slick tyres after the new formation lap: however, a technical issue with the pit-stop release system meant that Kimi collided with Nikita Mazepin’s Haas in the pitlane, suffering no damage but receiving a 10 second penalty for his role in the clash. Antonio was also hit with a setback, a stop & go for speeding in the pitlane. Burdened with those penalties, both had their work cut out.

Antonio ended up closing in to Mick Schumacher but, on the tight and twisty Hungaroring circuit, overtaking proved impossible. Kimi was able to catch up the four-car battle for P9, but after passing Daniel Ricciardo he had to settle for P11.

The result is disappointing, but many races remain to break once again in the top ten. The summer shutdown will now offer an opportunity to recharge the batteries and come back stronger.

Frédéric Vasseur, Team Principal Alfa Romeo Racing ORLEN: “It ended up being a very tough weekend for the team, after a promising start. We came into the race after a good Saturday in which we delivered the best overall qualifying performance of the season but the opening stages were chaos. We got blocked in turn one, trying to avoid the start incidents, and we had to recover from the back of the field on a track where overtaking is very hard. Unfortunately, a collision with Mazepin and a speeding in the pitlane offense meant that both Kimi and Antonio received penalties and we weren’t able to turn this chance into points at the end. It’s a shame as it was an opportunity to score big points: but we keep working hard, knowing we will have more opportunities in the second part of the season.”

“The start of the race was a bit what you would expect in these conditions, with a hectic first lap and lots of things happening. We looked quite ok until the penalty, which pretty much compromised our race: there was an issue with the traffic light release system and we ended up colliding with Mazepin. Up until the penalty, we were deep in the points, but making it back from the bottom was just too much.”

“It just wasn’t our day. It was a race where we had the chance to bring home a good result and we didn’t, but it is what it is. With the penalty after the restart, our race was pretty much compromised: it’s hard to say how much pace we really had as I spent a lot of time in traffic, but when in clean air we were pretty good so it’s disappointing not to finish in the points. Let’s focus on recharging our batteries in this break and then come back stronger in Spa. There are still many races to come after the holidays and we will not give up.”